Android vs. iOS: Pros and Cons 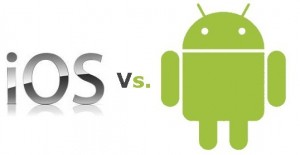 Ask any technophile what to look for in the best smartphones and tablets, and you'll likely be bombarded with at least a dozen different reasons to choose between Apple's offerings and those running the Android operating system. For any newcomer into the mobile marketplace, it can be a daunting task to differentiate between the two systems and pick out their strengths and weaknesses. Fortunately, with a little bit of know-how, it is relatively simple to pick apart the features offered by both and pinpoint the best phone or tablet for you!

Hardware
As far as hardware is concerned, there are a few things to keep in mind. Since only Apple devices can run iOS, device releases are a bit more spread out, so if you want hardware upgrades, you may have to wait. On the other hand, Android runs on devices from a veritable menagerie of manufacturers, ensuring that the cutting edge remains only a few months away at most. That being said, Apple has total control over the platform on which its system runs, making sure that the the software and hardware work seamlessly. Android must be squeezed and stretched to fit many different configurations, leading to more hiccups in performance and usability.

Both the Google Play Store and Apple's App Store are chock full of wonderful apps ranging from day planners and alarm clocks to the latest in 3D mobile gaming. There's not much difference between what you can expect from the different markets, really. Yes, some apps will be available only on the Play Store and vice versa, but the heavy hitters (Facebook, Gmail, Snapchat, etc.) are all present on both, so no worries there.

Hands down, Android is leaps and bounds ahead of iOS when it comes to device personalization. With live widgets, configurable screens, and the ability to exclude some app shortcuts from the front screens, it is easy to set up your device exactly how you want it. IOS's aesthetic is carefully crafted by Apple, and they don't provide much room to tinker with it, unfortunately.

Beyond these three major areas, it really comes down to personal preference. When deciding which of the countless phones and/or tablets for sale is best for you, just try them out in an electronics store. Specs and features are nice, but ultimately, it's all about what device you feel most comfortable with!